Late to the party, but still well-bread

About six years ago, Mark Bittman published a recipe for bread that requires no kneading and yet comes out amazingly good.

It's not so much skipping the kneading that makes this bread what it is:  it's the increased water, the reduced yeast, and most of all, baking the bread in a hot, covered pot.  The smaller amount of yeast means that the bread can make a very long, slow rise, which develops texture and flavor.  The high water content means that the bread expands quickly when it's baked, giving the characteristic big holes that you get with artisan bread.  And the covered pot, combined with the steam that the extra water provides when it heats, gives a hearty crust.

I finally found this recipe about six weeks ago, and I think I've baked at least eight loaves since then.  They've all been terrific.  I've made a few slight modifications, so I'll give my formula:

You throw everything but the wheat bran into a bowl and stir it until it forms a very loose dough.  (Be sure you incorporate all the flour into the dough--don't leave any lurking under the dough at the bottom of the bowl.)  Put it in a glass or plastic bowl, cover with plastic wrap, and let it sit in a draft free place for at least 12 hours.  You can let it go up to 24 hours; I would say I usually let it sit for 14 - 16 hours.  (In other words, you do this in the afternoon or evening and plan to bake it the next day.)

When it's risen fully, it will be bubbly on top and will smell a bit like beer.  That's good!  It's the yeast doing its work.  Turn it out of the bowl onto a floured surface.  It will be a bit of a mess, but don't worry.  Work in a little more flour if it makes it easier to handle, but just knead it gently until it forms a ball.

Set the ball of dough on a clean linen towel (not terrycloth--you don't want fuzz in your bread) that you've generously sprinkled with wheat bran.  Sprinkle some bran on top of the dough and fold the towel over the dough to cover it (or use a second towel).  Let that sit someplace safe for a couple of hours.

Half an hour before you want to bake the bread, set a Dutch oven with its lid into the oven and turn the heat to 500 degrees (I like this better than the 450 in the recipe).  The Dutch oven will get very hot, which is exactly what you want.  When you're ready to bake, take the Dutch oven out (use good oven mitts!) and set it on a heatproof surface.  Dump the dough into the pot (bran will fly everywhere, which is why there are brooms), and then shake the pot gently to distribute the dough evenly.  Cover the pot tightly and put the whole thing into the oven.  Bake for half an hour, then uncover the pot and bake for another 10 - 15 minutes to brown the crust fully.

When it's done, slip it out of the pot onto a rack to cool.  Then try to fend your family off while they run for the hot bread.

Bittman later published a modified recipe that takes less time.  I haven't tried it yet, but I'm sure it too would be good.

It only took me six years to find this recipe.  Now I'm baking a loaf more or less every other day, because we like it so much.  Better late than never, as they say.
Posted by David Schildkret at 1:11 PM 0 comments 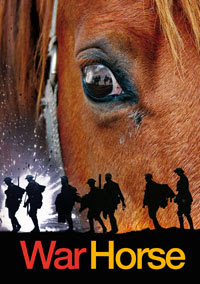 The whole family was in New York City last week as a way of celebrating Miriam's graduation from college and, well, just because we like going to places like New York City.  We visited the Natural History Museum (and got hours of laughter from imagining how a Tyrannosaurus Rex could possibly use those idiotically short arms of his) and the Metropolitan Museum of Art, walked around Chinatown and Little Italy, strolled through Central Park praising Frederick Law Olmstead (the architectural genius behind it all) and generally had ourselves a terrific time.

The highlight for me was seeing the play "War Horse."  On one level, the show, which tells the story of a farm horse that is conscripted by the British crown to fight in World War I, is extraordinarily simple:  most of the time, the stage is nearly bare--there is hardly any set.  The centerpiece is a remarkable machine (you can't really call it a puppet) that evokes the horse of the title.  (If you don't know what I'm referring to, take a moment to look at this.)  Three actors operate the machine so that the horse gives a breathtaking performance.  It is spellbinding--there is no other word.

We first saw the machine/puppet while touring Lincoln Center.  The guide said something about how he, as an audience member, had stopped paying attention to the puppeteers and came to believe it was a real horse.  I didn't have that experience:  I was always aware that it was not a real horse, and that was what made it so remarkable.  I think it was Brecht who pointed out that playgoers don't forget that they're watching actors in a play.  We don't forget that we're watching movies or television.  Part of what captivates us is our awareness that we are experiencing an illusion.  If it were real, or seemed completely so, it would be unremarkable:  reality is all around us, and we don't need reminding of it.

When it works--and it does, stunningly so, in "War Horse"--the experience is like nothing else.  It is truly life-changing, and that, as Elizabeth gleefully pointed out, is why we do what we do when we create performances.

If you have the chance to see "War Horse" in New York, seize the opportunity.  You will be transformed, and your imagination will be sparked in ways you might not have thought possible.

(PS:  It's worth pointing out that only yards away from the Vivian Beaumont Theater, where they're creating theatrical magic with "War Horse" by making the audience do much of the work, stands the Metropolitan Opera.  In that house, massive sets and stunning costumes cloak the music in a fabric of monumental naturalism.  It is an altogether different way of firing the imagination, but it works just as wonderfully.  Perhaps this is more workable in opera because the medium itself is so removed from reality:  as fun as it is to sing stories, it isn't very much like everyday life.  Surrounding the singing with something that looks like it could be a city street or a ballroom underscores the unreality, just as having a wooden puppet portray the emotions and reactions of a horse takes us farther from ordinary life to a deeper truth.)
Posted by David Schildkret at 8:39 PM 1 comments