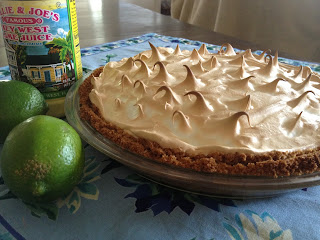 A confession:  I wrote this entry months ago, but I wanted a photo.  I took the photo and promptly forgot the whole thing.  Just now, I went to post a holiday recipe and found this lurking.  So here it is.  The holiday recipe (for Sue's family stollen) is forthcoming.

The actual post:  The headline here isn't hyperbole--the only way a pie could be simpler would be if you bought it from the store.  All you have to do for an amazing Key Lime Pie is to combine lime juice with some sweetened condensed milk, stir it up, and pour it into a pie shell.  Then you top it with something.  If you're really cooking challenged, it could be whipped cream.  That's all there is to it.  Really.  And it comes out fabulous.

Of course, I do have a couple of tricks that make it a little nicer, but you could make a perfectly acceptable pie with just the basic steps I mentioned there.  (And if you prefer lemon pie, you could use lemon juice instead of lime.  I've done it.  It's delicious.)  The lime flavor will be more intense and brighter if you put a little grated lime rind into the custard, and stirring in some egg yolks gives it a nice richness.  Plus then you have some egg whites around to make a meringue for the topping, which I prefer to whipped cream for this pie.

That leaves only the crust to be considered.  In a pinch (and I've done this more than once), you can buy a graham cracker crust at the grocery store.  This doesn't seem like much of a compromise to me:  what difference does it make if you crush store-bought graham crackers or if they do?  But after I discovered Galletas Maria in Venezuela and found that they're pretty easy to come by in grocery stores in the US, I decided that those might make a good crust for Key Lime Pie--and they do.  Their flavor, less distinctive than graham crackers, complements the lime better.  So if I have time, I'll take the extra step of making a cookie crust of my own.  You could use a pastry crust if you prefer.  (Click here for a printer-friendly version of the recipe.)

Preheat the oven to 350 degrees F.

Pulverize the cookies in a blender, or the bowl of a food processor, or by putting them in a plastic bag and rolling over them with a rolling pin.  Combine the crumbs with the butter and sugar, then press the mixture into a shallow 9-inch pie pan.  (I push it in there roughly with a spoon or rubber spatula, then smooth it out by using a smaller pie pan as a press--I push the smaller tin against the inside of the crust until it's even.  You could use the bottom of a drinking glass to accomplish the same thing.)

Bake the crust for about 10 minutes, until it is lightly browned.

Cool the crust completely before going on.

1 14-oz. can sweetened condensed milk
grated rind of two small limes (about 1-1/2 inches in diameter)
1/2 cup lime juice (I squeeze the limes I've grated, then top it off with some bottled Key lime juice--Key lime juice has a more intense flavor than the regular kind.  Using some fresh juice brightens it up a bit)
4 egg yolks

Beat the egg yolks.  Add the milk and the lime rind and give it a stir.  Finally, add the lime juice and stir it with the whisk until it comes together.  Pour it immediately into the cooled pie shell.  (The citrus juice causes the condensed milk to form a custard.  No cooking is needed.)

Once this is done, proceed immediately to making the meringue topping.

4 egg whites, preferably at room temperature
generous pinch of cream of tartar (Cream of tartar is tartaric acid.  Acid helps to stabilize the meringue and gives it greater volume.)
1/2 cup sugar (If you can get it, superfine sugar is fabulous for this.)

Preheat the oven to 375 degrees F.

Carefully spread this on top of the custard in the pie.  Be sure to seal the meringue right to the edges of the crust.  Bake in the oven for 12 - 15 minutes to brown the meringue.

Cool on a rack, then refrigerate for several hours before serving.


It's true:  this recipe uses raw eggs.  If you're worried about salmonella, you can omit the eggs and top the pie with whipped cream.  If you do that, wait to put the whipped cream on top of the pie until just before you serve it.

This pie--and the way people scarf it down--remind me that if things are good, they don't need to be complicated.  Early in my cooking days, I favored recipes with lots and lots of detailed steps:  somehow I thought it was better if I did more work.  Along the way, I've learned that quality and complexity are not necessarily connected.  As with so many things, if it's good, it's right.
Posted by David Schildkret at 5:09 PM