The Colors of a Commute in Phoenix 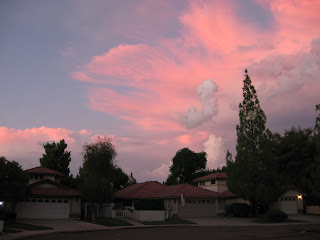 The blog has been quiet lately because Sue and I were in a show; the performances were last Thursday and Friday.  Her high school drama department was doing Footloose, and the director, Susan St. John--a pretty deft hand on the stage herself, as we saw when she appeared in a play called Devil Boys (or something to that effect)--wanted to have adults play the parts for adults.  What a concept!  That way, the kids could be kids.  Not everyone was happy:  there were a few students' parents who thought that the kids should do everything.  I understand their thinking, but I also understand Susan's.  There was a gaggle of kids in this production; I doubt that anyone who deserved to be in it got left out.  And as Susan pointed out, the adult roles are kind of stuffy.  The kids get to have all the fun in this thing.  So Sue and I got parts.  I played the preacher, Shaw Moore--a stick-in-the-mud who has convinced the town to pass a law against dancing after his son dies on the way home from a dance.  Sue played Vi Moore, the preacher's wife.  The most interesting bits were the places where their lives overlapped ours.  We spent a lot of time on the stage arguing, and while we don't argue all that much in real life, we've still managed to do plenty of it in a 35-year relationship.  We've got that down pretty well.  There's a rather touching reconciliation at the end, and everyone thought we got that part just about right.  I opined that it's because Shaw apologizes to Vi in that scene, and any husband has plenty to apologize for after 35 years. I wasn't acting.

But I digress.  (Really?  I hear you say, David digressing?  Is it possible?  Your sense of irony is delicious.)  Because we were in a show together, it made sense (at least to me) for me to take Sue to school in the morning, then come back for rehearsal in the afternoon and ride home together.  This didn't actually save any gas, but it did mean that we got to spend a total of an hour together in the car--an hour we otherwise would have spent on our own.  I liked this.

And there was an unlooked-for bonus:  because I was driving both at sunrise and sunset, I got to see the amazing colors of the Arizona sky twice a day.  They really are remarkable, and trying to describe them in words is nearly impossible.  It's not just the sky:  there's the added advantage that you can see two mountain ranges as you drive along Baseline Road, and they show off to best effect when the sun is low in the sky.  Nearly every day, the sight was breathtaking.

This is all the more remarkable because I would have told you (had you asked) that Arizona is basically beige.  In fact, I have the start of a pretty good essay on the topic that I've called "The Color Beige."  It's too long for here, but I may give you some bits of it from time to time.

One reason it's beige is that people paint their houses beige.  They would probably be more imaginative if the homeowner's associations didn't restrict their palettes to various tints of brown, tan, sand, buff, cream, ivory, biscuit, camel, oatmeal, and ecru.  But homeowner's associations make Shaw Moore look positively amenable:  they love conformity, uniformity, and consistency, and they love to scold you about it.  So everything here is beige, one way and another.  I guess it's supposed to blend in better with the landscape.  But one problem is that everything looks exactly alike.  I routinely drove past the first house we lived in here:  it looked like all the others.  When we bought a house, we got one at the end of a street.  That way, I can find it.

But thanks to being up literally at the crack of dawn, I got to see that, once in a while, for a brief, shining moment, the sky is radiant.  It has the soft glow of the inside of an oyster shell, and the colors range from red-purple near the horizon, through an orange pink as you go higher, to a soft golden light at the dome of the sky.  And the mountains, half in shadow, reflect those colors so that they, too, look beautiful.  It's a transformation:  the rest of the time, as Sue aptly says, the mountains here look pretty much like piles of gravel you might find at a construction site.

So the reward for leaving the house at 7 a.m. every day for nearly a month (apart from getting to spend that extra time with Sue) was to watch the sky slowly brighten with those roseate colors.  The transformation was gradual, and it was easy to miss.  In fact, I wonder how many people out at that hour even noticed it.  Most of us are so eager to reach our destinations (especially during rush hour in a hopelessly disorganized city like Phoenix, where no road is adequate to the traffic) that we look at little but the road ahead of us, thinking terrible thoughts about the idiot in front of us who is making us late.  Or we're on the phone, or we're texting, or we're sipping a hot latte and trying not to spill it in our laps, or we're putting the finishing touches on our eye makeup (my personal favorite--although the other morning I saw a lady taking the curlers out of her hair while she was driving, and I thought that was pretty cool). 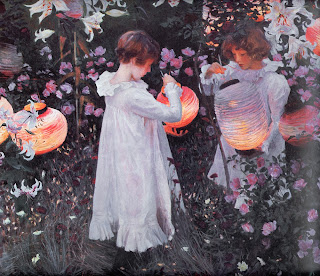 These colors are not dramatic, which is part of their appeal.  (Sometimes the sky here is dramatic, like the photo at the top, but not all that often, actually, and it's not the most interesting thing that happens.  There are no photos of the sky I'm describing now because, well, I was driving.  Besides, I'm not sure it would actually register with all its nuances in a photograph.)  It's the softness of it that's so surprising, especially in this harsh climate with its hard, edgy landscape.  For just a moment, both at sunrise and sunset, everything goes soft and warm.  It's quite wonderful.  You get a little of the idea from Sargent's "Carnation, Lily, Lily, Rose," which I've copied for you to the right.  It's in the Tate Museum in London, and it took Sargent two autumns to paint it, because there were only a few minutes each afternoon when the light was exactly right.  That's the light and color I'm talking about.

It's a pretty good compensation for the pervasive beigeness, and it's even partial compensation for having to get up early.  I remember once being in a hearing to oppose the construction of a cell phone tower in our lush neighborhood in North Carolina, where there was nothing taller than a tree.  One of the members of the zoning board asked me if I really looked up often enough to be bothered by it.  Yes, I replied, I do.  I'm glad to say that I still do.  Keep looking up.
Posted by David Schildkret at 3:57 PM