Pointing (or giving?) the Finger 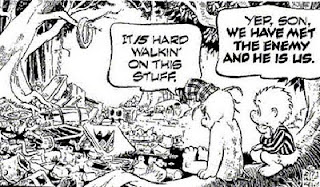 When I saw this article by Nicholas Kristof of The New York Times asking "Why Pay Congress" if they allow a government shutdown on Friday, I thought, "exactly."  I had been mulling the same question earlier in the evening.  Why should they get paid if they don't do the job?

But really, who's to blame?  The Congress, or the people who elected the Congress?  I think we're too willing to blame "government," as though it were something separate from us.  The US Constitution famously begins, "We, the people..."  Lincoln described our system eloquently at Gettysburg when he called the United States a "government of the people, by the people, and for the people."  When government doesn't work, citizens bear a healthy share of the responsibility.  We elected those representatives who aren't doing their job, or we sat on our hands and didn't vote, which is possibly worse.

It's fashionable right now to suggest that the US government is too big and too expensive.  But as I've observed before, we're only willing to cut things that someone else gets:  our government benefits, whatever they may be, are right and proper and can't possibly be cut.  In fact, I suspect that's probably true in most cases, so we should stop carping and pay the bills.  When Noa, my student from Venezuela, was here, I observed, "Everyone wants smaller government until they need something from the government.  If there's a hurricane, or a flood, or an oil spill, or someone gets gravely ill, they want government help.  It's just that we think we can have smaller government all the rest of the time and expect it to work for us in a crisis."

I share the belief that we should count on the government when something really bad happens, but we need to understand that the machinery has to be in place.  You can't expect to invent it on the spot only when you need it.  You see, I think that government is a good way for people to get together to solve problems that would be harder to solve on your own or in small groups.  It's a big-box theory, actually, a bit like those big stores that succeed because they do such a big volume:  spread the problem around among 350 million people, and it has a whole lot less impact on any one person than if a few people had to bear the burden alone.  Unfortunately, beginning around 1980 with election of Ronald Reagan, it has become an article of faith in American politics that government causes problems instead of solving them.  I don't believe that, but it's how we behave now.  We no longer have any faith (if ever we did) in the ability of government to make things better.

My grandmother liked to describe the American way of life as "Hooray for me and the hell with you."  If that was true years ago when she said it, it seems to be more true now.  The mood of a lot of the American electorate boils down to "you're on your own."  Sick and old in the US?  You're on your own.  Poor and uneducated in the US?  You're on your own.  A kid in the US from a poor family?  On your own.  And so on.  This thinking comes from people who've made it.  They say, "Hey, I am doing pretty well, what's wrong with those other people?"  Well, if you're sick or old or poor or uneducated or from a place where it's nearly impossible to get a decent education, how are you supposed to make it on your own?  For me, that's where we come in--as people who, through the instrument of government, extend a helping hand.  Otherwise, Grandma was right:  America is Hooray for Me and the Hell with You.

Some years ago, there was a famous Pogo cartoon with the caption, "We have met the enemy, and he is us."  It originally referred to the mess we're making of the planet, but it just as easily applies to government.  Yes, those folks we elected to Congress should get to work and solve something.  They should remember that government is by, of, and most of all, for the people.  They should remember that government, efficiently and properly run, can be our best way to harness the mass energy that is the American people and put it to work solving problems.  But if they don't, we need to place the blame at least partly with the people who put them in office.  And that, my friends, is no other enemy than the one Pogo identified almost exactly 40 years ago.