A Bagel Purist Speaks Out 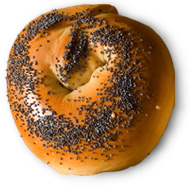 OK, I admit it.  I'm both a snob and a purist when it comes to bagels.  There is a very good reason for this, so I feel justified in my rectitude.  See, I was raised on bagels.  I was eating them when only Jewish people (and a few enlightened New Yorkers) had them.  Bagels are Jewish food, and they're serious stuff.  They're a treat, actually, not everyday fare.

To me, a bagel means Sunday morning, because that's when we'd have them in my house when I was a kid.  My dad would go to a deli that had good bagels--it was always a quest to find the perfect bagels at the best price.  This was a particular challenge when we moved from Brooklyn to southern New Jersey in 1961.  Dad liked a lot of things about living "in the country," as he thought of it, but one of the sacrifices was giving up first-rate delicatessen.  Every once in a while, he'd sigh:  "What I could really go for right now is a nice hot pastrami sandwich...."  Anyhow, Dad would find a good deli and buy bagels, cream cheese, and various species of smoked fish.  Lox (cured salmon) was standard, and one test of a good deli was that they knew how to slice it:  paper thin, so that you could almost see through it.  He also liked smoked whitefish, carp, and sable.  (I haven't had carp OR sable in years, because, well, you just can't find decent deli anywhere but in New York.)

A fresh bagel--or sometimes a biali--slathered with cream cheese and layered on top with just a little lox or some other fish (not too much:  the fish was expensive) was a rare and idyllic treat.  Of course, you'd be guzzling water for the rest of the day, because the salty fish made you thirsty.

Sometime in the 80s or early 90s, bagels went mainstream.  It always fascinates me to see women in track suits who look very WASP munching on this quintessentially kosher item as though it were diet food.  And the things they put on a bagel!  Sprouts?  American cheese?  Peanut butter, for crying out loud?  I mean, I guess these things might taste OK on a bagel, and if you enjoy them, be my guest.  Who am I to tell you otherwise?  But I hope you'll forgive me for thinking it's just wrong.  Like putting mayonnaise on French fries.  (Somebody probably does that and loves it--peanut butter on French fries?  Grape jelly?  Work with me here.)

Worst of all, though, in my reactionary opinion, are sweet bagels.  Adding fruit-flavored cream cheese only heaps sin on sin.  If you want something round and sweet with a hole in the middle of it, have a doughnut, for heaven's sakes!  I mean, doesn't the chewiness of the bagel kind of contradict the sweet flavor?  It would to me.

The other abomination to me is toasting a bagel.  See, this is only supposed to happen with stale bagels.  Taking a good, fresh bagel and sticking it in the toaster to incinerate it is just disrespectful.

So here are my basic bagel rules:

1.  Bagels should be simple.  Plain is best; poppy seeds or sesame seeds are OK for a change.  Stick to that.  (Salt bagels?  Have a pretzel.  "Everything" bagels?  Sheesh.  A mish-mash!)

2.  Eat bagels when they are fresh, and don't toast them.  Reserve toasting for day-old bagels, if you've been foolish enough to let them sit around that long.

3.  A bagel may be eaten with cream cheese or butter.  There are two options:  slice the bagel crosswise, or (by far the more decadent and delightful choice) break the bagel in half and put some butter or cream cheese on the exposed round bit.  Take a bite, then put on more butter before the next bite, and so on.  This ensures that you get your full daily requirement of butter and/or cream cheese.  If you're feeling especially dissolute, you can even alternate butter and cream cheese with successive bites.

4.  Reserve sandwich fixings for bread.  Keep the topping on the bagel simple.  Cream cheese, a little lox--that's all you need.  (I occasionally make a concession to haute cuisine and have the capers, onions, and tomato with the lox, because I admit they taste good.  But no self-respecting Jew ever adorned lox with those things.  I suspect allowing them to be added to my bagel and lox is a mark of my assimilation.)

5.  Remember:  bagels aren't sweet.  Just as you wouldn't put lox on a doughnut, don't turn bagels into pastries.  They make lousy pastries anyway.  Besides, a plain bagel is better for you--and the fish has Omega-3s in it.  Bagels and lox are the true health food.

Oh, and one more thing.  "Lox" might sound like a plural, but it isn't--just like "fox" and "box" aren't.   Anyhow, "lox" is a category, like "beef" or "chicken."  So go ahead, have some lox on a bagel.  And remember to tell the girl behind the counter (who has never darkened the door of a Jewish deli) to skip toasting the bagel.
Posted by David Schildkret at 7:54 PM