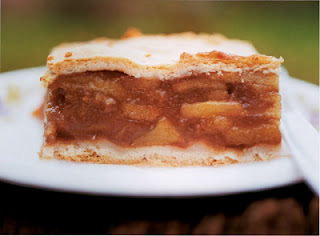 Some students are coming over for dinner tomorrow night, which means I get to cook outrageous amounts of food (I can give them the remains, so that we don't get fat eating them ourselves).

One of the things I'm making is this pie.  It is an extraordinary apple pie, with a filling unlike any other I've ever had:  the long, low-temperature baking turns the apples into something smooth and creamy more resembling apple butter than a pie filling.  It's heavenly!

One of the kids (I think it was Miriam, but if not, they'll set me straight) dubbed this "Apple Lasagna," because you are supposed to bake it in a 9 x 13" pan--the kind we usually use for lasagna.  Actually, we fairly quickly decided that it was an obscene amount of pie unless you were feeding a HUGE crowd--it usually went bad before we could eat all of it.  So I've done two things to this recipe.  I've cut the proportions for the filling in half, baking it in a deep-dish 10" pie plate, and I use my usual crust recipe instead of the all-vegetable shortening one called for here.  Also, to get the crust nice and flaky, I heat the oven to 425 degrees and turn it down to 250 when I put the pie in.

The main problem with this pie is that you have to smell it baking for 3 hours.  By then, you are ravenous for pie, but you can't eat it for at least 4 hours!  I hope there is some left when the students arrive tomorrow...