A few notes in followup to yesterday's cooking frenzy:

PIE:  For years, I've sought the perfect pie crust.  I was once completely taken in when my boss's wife made a pie with a fabulous crust.  When I asked how she made it, he gave me this whole rigmarole about temperatures, brushing the top with milk, and a few other ritualistic exercises.  Turned out it was a Pillsbury crust from the supermarket.  But the hunt was on.  I thought I was doing pretty well until I tasted a pie Melissa Solomon made.  This woman, a former student of mine, is not only a to-die-for soprano, she makes heavenly pie crust--light, delicate, flaky.  I asked for her recipe.  It was identical to mine.

I'll never match Melissa's light touch, but I came close yesterday.  The secret?  Lard (God forbid! my Jewish ancestors are saying) and vinegar.  I know.  Lard sounds positively awful.  Just saying the word makes my arteries harden. But nothing makes a better crust, and believe me, I've tried about every option there is.  I use half butter and half lard in mine, and it's fabulous.  I also tried another trick I'd read about:  adding a small amount of vinegar.  Remarkably, this doesn't affect the flavor.  (It's all the more remarkable because it turns out I haven't got any white vinegar in the house, so I used cider vinegar.  No problem.)  Apparently the acid in the vinegar inhibits the development of gluten.  While you need gluten in cakes and breads, it's the enemy of flakiness in pie crusts.  (By the way, Melissa has no need of such crutches as lard and vinegar:  her crust is made with shortening.)


By now, you probably want the proportions, so here they are (click here for a printer-friendly version of the recipe):

You probably know how to make a pie crust, but just in case you don't, here's the method:

1.  Combine the flour and salt.

2.  Cut the butter and lard, which should both be ice-cold (even frozen) into small chunks and put it into the flour.  Give it a quick stir to coat the lumps of fat with flour, then, using a pastry blender or two knives, cut the fat into the flour until the mixture resembles coarse meal.  Be sure to use a cutting, rocking motion with the pastry blender rather than a mashing motion.  Mashing will tend to encourage the formation of gluten.

3.  Add the vinegar and 1/4 cup of ice water.  Using a fork, stir things gently, adding more water bit-by-bit until the dough just comes together.  If it's a tiny bit crumbly, it'll be hard to roll but all the more flaky.

4.  Divide the dough in two and form each portion into a disk about an inch thick and about six inches across.  Wrap in plastic wrap or wax paper and chill for at least half an hour.  (You can chill it longer, even a day or more.  Just take it out of the fridge for a bit before you start working with it.)

5.  Roll it gently and quickly on a floured board until the disk is about two inches wider than your pan.  So for a 10-inch pie, you want a 12-inch disk.

6.  I recommend chilling the crust after it is formed.  I pop mine in the freezer while I mix up the filling (be sure you use a Pyrex dish!).  If I'm blind-baking the crust (baking it unfilled), I chill it in the freezer for 15 - 20 minutes before baking.

TURKEY:  The salting method I got from Saveur produced a bird with a beautiful bronze skin.  The meat was juicy and flavorful, but I think not as flavorful as a brined bird.  My 15-pound turkey, stuffed, took about 4-1/2 hours to cook.  I was careful to take the turkey out of the fridge about two hours before I wanted to cook it:  that shortens the time in the oven.  After about 45 minutes, I covered the breast fairly closely with a double thickness of foil more or less shaped to cover only the breast.  I heard about this trick someplace; the idea is to slow the cooking of the breast so that it doesn't overcook while the dark meat cooks--the dark meat needs to reach a higher temperature.  I think it worked pretty well.  On the whole, I was satisfied with this, but truthfully, I think a brined bird has more flavor.  So my latest thought is to combine the two methods:  brine the bird for 12 hours or so, then let it sit on a rack in the fridge for a day or two.  I think the result would be spectacular--I suspect the skin of the salted bird comes out so well because the turkey is completely dry when it goes into the oven.  Basting every hour or so also helped make the bird look spectacular, so I'll use the Saveur idea of putting a couple of cups of stock into the roasting pan when I put the turkey in the oven.  I've used a covered roaster in the past, but I think an open roaster actually works better.

And today, of course, it's leftovers.  I love leftovers--but none so much as those from Thanksgiving.  As much as I enjoy cooking, it's nice to get a second meal from all that effort.

Of course, there might not be enough after I have a turkey sandwich for lunch...
Posted by David Schildkret at 11:11 AM 0 comments

A quick note while the turkey roasts.

I love Thanksgiving.  It's basically an excuse to cook as much as I can stand--and I can stand a lot of cooking.

But--and this may surprise you--I don't do anything ambitious or fancy for Thanksgiving.  To me, Thanksgiving isn't a gourmet occasion; it's a time for nostalgic food, well prepared.

Mom is bringing cheese, crackers, and a spinach dip she makes using a packet of Knorr vegetable soup.  I think the recipe is on the box.  We'll nibble on those beforehand, in case the turkey takes longer than I thought it would in the oven.  (Have you noticed that timing the roasting of a turkey is a distinctly iffy business?)

We're having turkey, of course, with stuffing.  I do cook the stuffing inside the bird, despite all the snobbery against it.  I'm sorry; it just tastes better when it's soaked up all those juices from inside the bird.  My stuffing is bread, onions, celery, and chestnuts with some seasoning.  OK, so I got adventuresome this year and threw in the grated rind of a lemon, the juice from said lemon, and two chopped Granny Smith apples.

In the past, I've brined the turkey, and it turns out well.  There are two drawbacks:  first, it's murder to find something large enough to hold the bird that will also fit in the refrigerator, and second, it can wreak havoc with the stuffing--all that salt water soaks into the stuffing, making it both too salty and rather soggy.  So when I heard of a different method that involves salting the bird but not using water, I thought it worth a try.  It was discussed on NPR last Sunday, and the article describing the method is here, in the latest issue of Saveur, a great magazine.

Along with the turkey and stuffing, there's gravy, of course (Miriam thinks this is absolutely crucial).  We're sauteeing Brussels sprouts in olive oil and garlic, we'll steam some butternut squash, and we'll have mashed potatoes.  Sue will probably make a salad with some nice Comice pears we found in the market.  (I love Comice pears.  This is the variety made famous by Harry & David; you can find smaller specimens that are just as tasty for a lot less money in many grocery stores these days.)

We have some students joining us.  Justine will bring some homemade cranberry sauce--otherwise, I would have made a compote of cranberries, apple, pear, orange, and pecans.

For dessert, there's pumpkin pie and chocolate cream pie.  The second strikes me as unusual, but another student, Melissa, adores this and for her it wouldn't be Thanksgiving without it.

Some years ago, we began inviting students to join us--I hated the idea of students who couldn't get home having no place to go on this family-oriented holiday.  Each time, I've asked them to tell me what dish says "Thanksgiving" to them, because to me, that's what it's all about:  that one dish that just takes you back to those Thanksgiving holidays of your dreams.  One student said it was creamed corn; she was astonished when I pulled out the corn, butter, and cream.  I think she was used to something from a can or a frozen packet.

I hope you have a happy Thanksgiving with that one dish that is de rigueur.  I know we'll be enjoying ours--the turkey smells amazing!
Posted by David Schildkret at 1:43 PM 0 comments

Getting Ready (a baking spree) 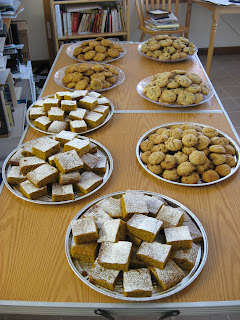 Last Saturday was the inaugural concert of the Barrett Choir, my new group at ASU.  So how did I prepare the day of the concert?  I baked.

See, the program was fairly short, and I thought that people should have a good reason to hang around for a while.  I had suggested that the students might want to organize a reception, but this is tricky for undergraduates who live in dorms and don't have ready access to a kitchen, ingredients, etc.

So I sallied into the breach.  The fruits of my labors are in the photo.  I baked two batches of pumpkin bars (I found several recipes for these online--all alike.  I chose to top them with a dusting of powdered sugar rather than ice them with cream cheese frosting.), a batch of my peanut butter cookies, two big batches of Toll House cookies--nothing fancy here, just the recipe on the 24-oz. bag of chocolate chips--and a batch of spice cookies.  I'll give that recipe below.

Sue was understandably worried:  we don't like to have a bunch of this stuff around the house, because we're always watching our weight.  She need not have been concerned.  There was a good-sized audience, and they scooped everything up in a heartbeat!  There wasn't a crumb left.  (The concert was pretty good, too.)

Now, the spice cookie recipe.  I'm a little apprehensive about posting this, because I honestly don't remember where I got it!  So if this is your recipe, I heartily apologize if I've stolen it.  It's really good, and it's quick and easy.

Ingredients2 sticks unsalted butter, melted and cooled to lukewarm2-1/2 cups of white sugar1 teaspoon each of ground cinnamon, cloves, and ginger1/2 teaspoon each of ground cardamom and nutmeg1 beaten egg1/2 teaspoon of salt1 tablespoon of baking soda (yes, a TABLESPOON) dissolved in ¼ cup of warm water¼ cup molasses (warm it briefly in the microwave for easy pouring)4 cups flourProcedure 1.  In a large mixing bowl, combine the melted butter with the sugar, spices, eggs, and salt.2.  Mix up the baking soda-water mixture and pour it into the batter; stir to combine.3.  Stir in the molasses.4.  Stir in the flour; the dough will be quite stiff.  Keep working it with a wooden spoon until it is well combined.5.  Drop the dough in walnut-sized lumps onto greased cookie sheets about 2 inches apart.6.  Bake at 350 degrees F for 8 - 12 minutes, until brown and crackled.Makes about 4-1/2 dozen cookies.


There are lots of ways to make people happy.  One is to sing beautifully to them.  Another is to give them a tasty homemade cookie.  And sometimes it's nice to do both.

We're coming to the season of tasty treats.  I hope yours are delicious and gratifying as a song.

Posted by David Schildkret at 11:32 AM 2 comments