An Englishman Rants about Tea


Lately, I've been trying to get up with Sue (or shortly after she does) so that I can help her get her breakfast ready--or at least her pot of tea.  Sue can't start the day without tea.  Tea-making is not exactly a ritual around our house, but we're careful about it.  We buy good tea--usually loose tea (we're especially partial to Ahmad's English Tea No. 1, which Sue's sister Martha finds for us, the heavens be praised, sold as loose tea in tins).  I am careful to warm the pot before I make the tea, though I suspect this is more about making sure the pot doesn't crack when you pour the boiling water in than anything to do with the quality of the tea that results.  I always pour boiling water onto the bags (PG Tips being the preferred ones) or loose tea.  It steeps for at least five minutes, under a cozy.  For years we had a whimsical one that was shaped like a duck.  Alas, it went the way of all flesh a few years ago. 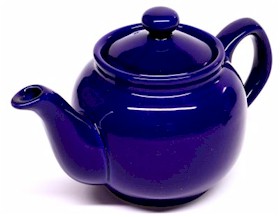 We use a teapot of a classic English shape, known as Brown Betty, although ours manages to be a bit unconventional by being a dazzling shade of blue.

The English, not surprisingly, are serious about tea, not to say dogmatic.  (Well, to be completely accurate, they turn making it into a religious observance.)  Christopher Hitchens, not the most cheerful guy under the best of circumstances, has a lot to say about the subject in an article for Slate.  In it, he cites George Orwell's 11 rules for making tea, written in the years of shortage after World War II.  Orwell comes off, at first at least, as a bit gentler than his latter-day countryman, Hitchens.  Orwell's essay is sweetly called "A Nice Cup of Tea," though by the end he is pretty strict:  "I maintain that my own argument [on which goes into the cup first, the milk or the tea] is unanswerable."  He does allow that there is little consensus on the milk-or-tea-first question, even within families, but clearly dismisses the milk-first school.  (I suspect the milk-firsters are relatives of the hot-potters:  they're trying to protect their china.  If you put a bit of milk in the bottom of the cup and then add the hot tea, the milk will cool the tea enough to prevent breakage.)

I am relieved to find that, in most respects, we follow the rules.  I will be more careful about bringing the pot to the kettle (I've been guilty of doing the reverse), but mostly I've got it right.  Whew.

Just yesterday, I had a cup of tea in a diner, and I lament with Hitchens about the way tea is served in the US, something that completely puzzles me. I got a mug of tepid water, a jug of tepid water (you read that right:  there was water in both), some lemon, and a Lipton teabag.  I was a little nonplussed--where was I supposed to put the teabag?  (You can usually rescue the situation at least a little by putting the teabag into the cup, pouring the tepid water from the jug over it, and then dunking the bag into the jug after something like tea emerges in the mug.)  Well, I stuck it into the water in the mug, where it quickly produced a dark brown liquid.  I wonder how Lipton achieves that almost instant color change?  I can attest, however, that it will work only once:  when I then put the bag into the water jug, it barely clouded the water at all.

When I was a child, tea was mostly offered if you were sick, especially if you had tummy troubles.  Then you got weak tea with loads of sugar in it--so much, in fact, that there was always a puddle of damp sugar left in the bottom of the cup.  That was a special treat for a kid, like the pile of milky sugar at the bottom of your bowl of Cheerios.  I was in college before I figured out that there was no difference in taste between what I knew as tea and a mug of plain hot water with sugar in it.  From that day on, I resolved to drink something better on the rare occasions when I drank tea.

Sue is the tea aficionado around our place, but I'm glad I got wise on this subject before I met her.  Still, I've learned a lot from her about tea and even appreciate a cuppa now and then--always with a splash of milk, and almost never with sugar in it.  If I'm sick, especially with a cold, honey can be nice in the tea.

I'm glad I can count myself among the Americans who know what tea is supposed to taste like and how to get it that way.  I apologize if this sounds like snobbery.  If you like your tea the way you've been making it, I'm not going to gainsay you.  But if a thing is worth doing, it's worth doing well.  What's more, it's worth finding out how to do it from people who care about it, even if you don't want to go to quite that much trouble.

But even while you're doing things according to Hoyle, go ahead, allow some space for spontaneity and even eccentricity:  let your tea cozy be in the shape of a duck or, failing that, let your Brown Betty teapot be electric blue.
Posted by David Schildkret at 12:02 AM