Recipe: Popovers (and an hommage to Maine) 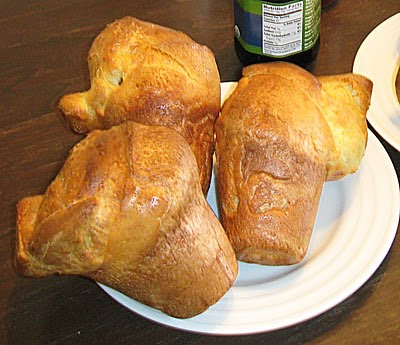 We spend every summer on Mount Desert Island in Maine.  This sounds unbelievably posh, even to me.  And, in fact, it is.  We have this boon because of the Mount Desert Summer Chorale, a really delightful group of volunteer singers I've conducted since 2000.

Thanks to them, we are on the outskirts of Acadia National Park from late June to early August.  Mount Desert Island is seriously one of the most beautiful places on the planet.  Allow me to convince you by regaling you with a just a couple of photos I've taken over the years.

The photo on the left is Jordan Pond, and this is important, because one of the things to do when you're on Mount Desert Island visiting Acadia National Park is to go to the Jordan Pond House in the afternoon for tea and popovers.  If you're really hardy, you'll bicycle there (I think we did that once) and have tea as a reward.  You have to do something to earn this, because a pot of tea and two popovers will set you back about ten bucks.  It's almost worth it for the atmosphere and for the fact that the popovers are really rather spectacular.  They're proud of their popovers there, as well they should be.  Just take a look at the photo below.

Well, I'm a cook.  I know that popovers are eggs, milk, and flour.  So how hard can it be?  Thanks to my sister-in-law Martha, who presented us with a very serious-looking popover pan a few summers ago, I embarked on a quest to make a decent popover.  It turns out to be tricky until you know how (and don't worry, I'm going to tell you how).  The first few batches I made were dense and heavy.  We ate them anyway, but they were rather leaden.  Recipes for popovers are maddeningly contradictory.  Some say you should preheat the pan; others say you should put them in a cold oven.  A few recipes use baking powder; most do not.  Some say that you should let the batter stand overnight; others make no mention of this.  I tried a number of variations, and now I have a foolproof method.  It works every time, and the popovers, I'll modestly say, rival those at Jordan Pond House.  Those are mine in the photo at the top.  Here's how mine look inside:

3 large eggs
1-1/4 cup milk (any kind works--except half-and-half!)
1-1/4 cup of flour, sifted before measuring (this turns out to be the key:  use too much flour and disaster will strike)
1/4 teaspoon of salt

Whip the eggs until they're frothy, then add the milk.  I now do this in a blender, but a whisk works just fine too.  If the mixture is cold, warm it for 30 - 45 seconds in the microwave, just to take the chill off of it.  Now add the flour and salt to the liquid and stir well until the batter is completely smooth.  It will be the thickness of heavy cream or egg nog.

Heat the oven to 450* F.  (I do suggest doing this after you mix up the batter, just so that the batter can stand a bit.)  When the oven is hot, pour the batter into a well-greased popover pan, to just below the top of the pan.  (Non-stick is definitely best here.)  Place the pan in the oven on the lower middle rack--no need to set the pan on a cookie sheet, though some instructions tell you to do that. (I find it browns the popovers too much on the bottom.)  Bake for 15 minutes.  Then, without opening the oven door, lower the heat to 350* F and bake for 30 minutes more.  Don't open the oven until the whole baking time is up.  Remove the popovers from the pan and serve hot.


Here's how they'll look.  I made this batch a few days ago--the last morning the girls were here.  Popovers, you see, have become a bit of a ritual in our house since I mastered the technique.

A few notes:  the one problem I occasionally have is with the popovers sticking.  A good non-stick pan prevents this.  I spray mine with cooking spray.  If you don't have a non-stick pan, be sure to grease the cups very thoroughly with something like Crisco.  Don't use butter or even cooking spray if you worry that they'll stick to the pan.  (Remember, these are basically eggs, and you know how eggs stick to everything.  There's no additional fat in the batter to help with this.)  I especially like the popover pan from Chicago Metallic, a company that makes really good bakeware.  (See the photo below, though you can also sort of see it in the picture I took of my last batch.) 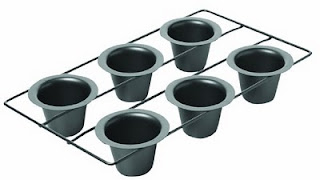 Popovers made in this pan will have all the grandeur of those at Jordan Pond House, but it's not the only option. Just to see what would happen, I made a batch the other morning in a pair of plain old muffin tins.  Here's the result:
As you see, they "popped" nicely out of the pan (well, one didn't, and of course I've got that one front-and-center in the photo!).  And they were nice and puffed inside, too, just not as big as the others.  (The batter made twelve in the muffin tin; the Chicago Metallic pan makes six.  So you can eat twice as many if you use a muffin tin!)  Again, if you have a non-stick muffin tin, there will be a lot less swearing in your kitchen when the popovers are done.  The next two photos show muffin-tin popovers.

But what if you don't have a non-stick pan?  Just grease the bejeepers out of the pan with Crisco.  Have a small sharp knife ready when they come out of the oven, because you'll probably have to run it carefully around each of the popovers to release them from the tin.

The biggest problem with popovers, I've found, is using too much flour.  Under no circumstances should you skip the sifting. (Confession:  I usually do skip it; it seems so unnecessary in most cases.  But don't skip it here.)  By sifting the flour and then measuring it, you'll get the right amount.  Knowing that some people like to weigh it instead, I weighed mine the other day; it was 6.5 ounces of flour.  Doing it by weight would probably be just fine.

Serve them with lots of butter and jam.  Jordan Pond House offers strawberry jam, but I think of blueberries when I think of Maine, so I like blueberry jam on mine.  I also like marmalade.  I hope you'll try making them, because they're fun and delicious.  Let me know how yours turn out.

I'm sure part of the reason I'm so keen on popovers has as much to do with where I've eaten them (in Maine) and who I've had them with (my hilarious sisters-in-law, Martha and Edie, and Sue and the girls, not to mention some really terrific friends).  Food is like that:  it can take you back.  So whip up a batch of something--popovers if you want--and make some memories.

Posted by David Schildkret at 9:06 PM