The Smell of Snow 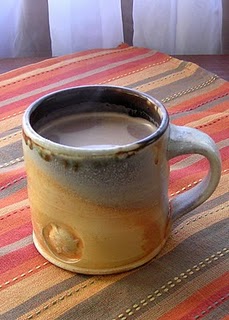 I live in Phoenix, Arizona, now, where today the temperature is in the sixties.  But my friends on the East Coast are getting buried under yet another snowstorm.  As I heard about this on the radio this morning, I had a sudden flashback:  when the announcer mentioned snow, I smelled bread baking and hot chocolate.

This goes back to my childhood in southern New Jersey.  It didn't snow often there--maybe one or two good snows a winter.  When it did, school was likely to be closed, and then it fell to my sister and me to shovel the driveway and the walks.  I still remember how much effort that took!  (If I tried it now, I'd probably keel over.)  While we were outside, Mom was busy in the kitchen.  She was a public school teacher in those days, and so when school was closed, she'd have the unexpected bonus of a day off.  That meant something good to eat.

Usually, there was a cup of hot cocoa ready for us when we came inside from shoveling.  There was also a loaf of white bread baking in the oven.  In fact, the only time I can recall my mom baking bread was on snow days.  So for me, snow instantly conjures the smell of hot cocoa and bread--an oddly and wonderfully warm association for such a cold thing.  (And by the way, I think cocoa should always come in a stoneware mug.  To me, it's nearly a sacrilege to serve it in a chi-chi teacup, or worse, some slender, curvaceous glass contraption, unless that's all you've got.  Cocoa is down-to-earth stuff that should be treated with heartiness and hearty respect.  It doesn't need dressing up.) 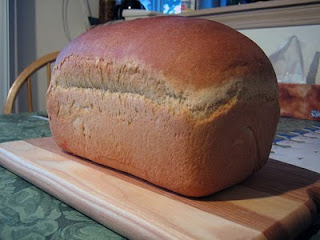 I don't much miss the cold and snow, but I do kind of miss that hot chocolate and the bread.  Oh, I can bake a very respectable loaf of bread (almost any kind you want), and I can certainly whip up a cup of hot cocoa.  But somehow, it just isn't the same.
Posted by David Schildkret at 3:13 PM