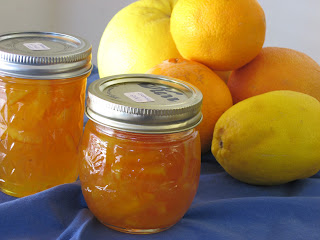 The other day, I made a couple of batches of marmalade.  I have to say, it tastes delicious.  I also have to say that it's time-consuming to make, doesn't use an awful lot of fruit (so it didn't accomplish much towards my goal of using up some of Arizona's citrus bounty), and may not taste all that much better than a good store brand.  It also uses a shocking amount of sugar:  I have never before had to measure out ten cups of sugar for a recipe!  Just remember that you're not eating all the marmalade at once.  (But if you're watching sugar, remember that each spoonful of marmalade is roughly half sugar.)  Still, that there's a certain romance in having made it myself, and people seem pretty glad to get a jar of it.

With all those caveats, I think it turned out well, and in case you want to try making some for yourself, here's a good method.


CITRUS MARMALADE
(Click on the title to open a printer-friendly version of the recipe.  When it opens, hit Control-P on your keyboard to print.)
1.  Peel the citrus fruit.  In the case of oranges and lemons, which tend to be relatively thin-skinned, say a quarter-inch or less, remove the entire peel.  If the skin is thicker (the way they are on Arizona grapefruits), remove the outer quarter-inch or so of peel, leaving the rest of the white pith behind.  (You do want some pith attached to the skin.) Slice the peel into very thin julienne strips.  Put it into an 8-quart stainless steel pot.

2.  Remove all the membranes and pith, especially from grapefruit, and add all the pulp and juice to the pot.  Be sure to remove any seeds.

3.  Add enough water just to cover the pulp and peel; you'll be adding roughly the same amount of water as you have pulp and peel.  The pot will be about half full; you don't want it more than half full or you'll risk it boiling over when you add the sugar later.

4.  Bring the contents of the pot to a boil, then turn off the heat and set the pot aside, covered, overnight.  (If you don't have a stainless steel pot, put the mixture into a non-reactive bowl--made of something like glass--to stand.)  This allows the peel to soften.

5.  The next morning, bring the mixture to a boil, then simmer for at least 2 hours, or until the peel is quite soft.  Meanwhile, place a small plate into the freezer to get thoroughly cold.

6.  Measure the mixture (mine was about 10 or 11 cups) and add an equal volume of sugar.  Stir to combine, then bring the marmalade to a boil.  Cook at fairly high heat (as high as possible, but watch for boiling over--if it gets too near the top of the pot, turn down the heat), stirring occasionally, until the temperature reaches 225 - 230* F on a candy thermometer.  This will probably take about half an hour.

7.  To be sure the marmalade will set, put a spoonful onto the cold plate.  Set it in the freezer for about 2 minutes.  If it's jelly-like but still just a bit soft, it's ready.

8.  Put the marmalade into sterilized canning jars and seal them. If any of the jars fail to seal, refrigerate them--the marmalade will still be fine and will keep for several weeks refrigerated.

This will make somewhere around 12 8-oz. jars of marmalade.

(A note:  resist the temptation to make large batches of this.  If you try too cook too much at once, it will be hard to get it to solidify without over-cooking it.  You want a nice, golden-orange color, not a caramel brown.)


The marmalade was delicious on the scones I made the other day.  Sue and I also found it really delicious (if completely decadent) with brie:  spread some soft brie onto a thin slice of French bread or a cracker, then top the cheese with a spoonful of marmalade. 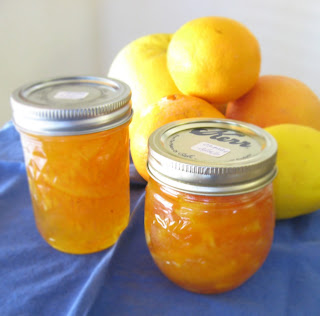 Despite the labor involved, I really do like having a spoonful of this now and then.  The color is magnificent, it tastes delicious, and it's really wonderful that the fruit came from the trees in my mom's backyard.  To me, the marmalade tastes like a little bit of Arizona sunshine, which at least at this time of the year, is lovely.  (It will get cruelly hot in a couple of months.)  It also calls to mind the completely heady scent of the citrus blossoms--an aroma that stops me cold every time I smell it.  That will begin here very soon, and I can't wait.

Posted by David Schildkret at 9:38 AM