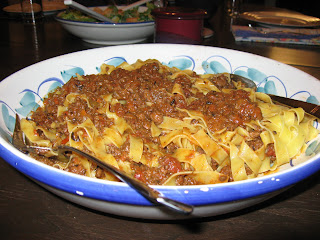 It's spring break, and Elizabeth came home last night.  That means pasta with Bolognese sauce.  That's because Elizabeth and I have a thing for Bolognese.

It goes back to a trip we took in January, 2001.  I was teaching at Salem College, and Elizabeth was a first-year student at Salem Academy, the all-girls high school connected to the college.  Both schools have a January term--a short session for special projects.  On at least three occasions, my colleague Joan Jacobowsky and I led study trips, two to England and one to Italy.  Elizabeth joined us on the Italy trip--three weeks in Rome, Florence, and Venice looking at art, going to concerts, and exploring churches.

What a trip that was!  Italy had spruced itself up, big time, for the Jubilee Year of 2000.  So almost everything was open, on view, and looking its best.  (Friends of mine who visited Italy before then almost always encountered something in restauro--under restoration--usually maddeningly and with no warning.  The only thing we couldn't see was Massaccio's Trinity, the first known use of one-point perspective in Renaissance art.  I still haven't seen it:  the church was closed on a later visit to Florence.)  Elizabeth generally ordered Bolognese for supper; she liked it, and it was pretty dependable.  It was delicious every time.  The matchless one, though, and the standard by which we have judged all other Bolognese since, was the one we ate at our hotel in Siena.

Our group--about 15 of us, I think--arrived in the early evening.  It was raining and dark, and the van drivers had to leave us, luggage and all, across from the hotel on a very busy road just outside the city walls.  We crossed it, taking our lives in our hands but suffering no casualties.  Once inside the hotel, we agreed that we weren't venturing across that road (in my memory it's more like a six-lane highway, but I'm sure it wasn't) to get supper.  Could the hotel provide something?  The very nervous desk clerk protested that the chef had gone home, but he looked at us, all bedraggled and looking like drowned rats, and said that he would see what he could do.

About half an hour later, he called my room to tell me that they had managed to put something together. Would we come right down?  Of course we would:  we were wet, cold, and hungry.  They seated us, apologizing profusely all the while for their improvised arrangements, and then served us the best meal we had on the entire trip:  antipasto, pasta, Veal Marsala, and a delicious tiramisu, all perfectly cooked, and all positively delectable.  Only in Italy, I thought, would a scrounged-up meal have four stellar courses.  The star of the show, as far as Elizabeth and I were concerned, was the pasta:  homemade tagliatelle (a broad, flat noodle) with the most luxurious Bolognese sauce I have ever tasted, before or since.

It was creamy, not really like our usual idea of spaghetti sauce.  The flavor was fairly simple, but it had depth.  It was completely delicious, and it lingered on the palate for a long time; it has dwelt in my memory even longer. I tried for a long time to duplicate it, without success.


A few years after that experience, Sue's brother and his wife gave us a copy of Benedetta Vitali's lovely cookbook, Soffritto.  It is filled with wonderful recipes, great writing about food, and gorgeous photographs.  What's more, it has a whole chapter on ragús  (Bolognese is a type of ragú),  and beginning with her instructions, I began to produce something much more like that Sienese sauce than anything I had cooked previously.  The secret, I believe, is the way you brown the vegetables at the beginning--the soffritto. 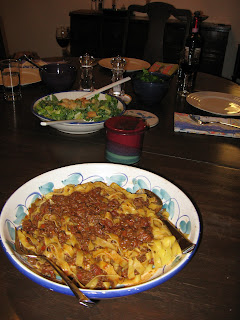 Soffrito is the Italian word for that universal combination of vegetables that is the basis for so much good cooking:  onions, carrots, and celery.  The French call it mirepoix.  Cooks in Louisiana use something similar; they use bell pepper in place of the carrots.  To make a really good Bolognese, you have to start with a purple onion, because purple onions brown better than yellow ones.  You need a good heavy pot, and you need to cook the vegetables in olive oil at a medium-high heat for a whole lot longer than you usually do.  You want the soffritto to be brown--not burnt, but nearly so.  (I tried to take a photo of mine, but all you can see is steam.  I couldn't find a photo on the web, either, probably for the same reason.  Next time, I'll take some out and set it on a plate so you can see it.)  It'll be about the color of cocoa, maybe a little lighter.  Then you put the meat in the pot, and you brown it to a fare-thee-well:  it'll get crusty and brown and probably stick to the pot a bit.  Again, it'll be nearly burnt.   That's the first key to a great Bolognese.
The others are time--cook it forever--and being judicious with the liquid.  It shouldn't be runny or even really sauce-like.  It should be a creamy amalgam of vegetables and meat with some liquid clinging to them.  One bite of this, and you'll be in Heaven--or maybe in Siena, which is nearly as good.
Here's what I do to make Bolognese.
BOLOGNESE SAUCE FOR PASTA
(Click on the title for a printer-friendly version of the recipe.  When it opens, hit Control-P on your keyboard to print it.)


1 lb. lean ground beef (80/20--that is, meat that is about 20% fat--is about right)
1 lb. mild Italian pork sausage in bulk (or removed from its casing if you can't get bulk sausage)
olive oil
1 large purple onion
1 or 2 large carrots
2 or 3 ribs of celery
1 cup good dry red wine, like Chianti
1/2 to 1 full 28-oz. can of chopped Italian tomatoes in their juice.  (I like Pomi.)
2-1/2 to 3 cups of milk
water to cover
salt and pepper
1.  Chop the onion, carrot, celery into small dice.  There should be roughly equal amounts of each vegetable, although I usually have a little more onion than anything else.   Put about 1/3 cup of olive oil into a very heavy pot, like a cast-iron Dutch oven.  Set the heat on medium-high.  Add the vegetables, and cook, stirring frequently, until thoroughly browned.  Especially as the vegetables begin to brown, don't leave the pot unattended.  Don't answer the phone!  Ignore that text!  This needs your full attention.
2.  When the vegetables are brown, dump all the meat into the pot at once.  Keep the heat quite high as you break up the meat with a fork.  Brown the meat thoroughly.  It will get crusty and maybe even stick a bit to the bottom of the pot.  Just be sure it doesn't burn (lower the heat a little if you need to).  Once it's broken up, you don't need to stir it too much.  After it's crusted, you can break it up again and let the other side brown.  Again, keep a close eye on this so that it doesn't actually burn.  This process of browning the vegetables and meat is likely to take half an hour or more.  Be patient.  Your effort will be rewarded.
3.  When the meat is completely browned, turn up the heat all the way and add the wine.  Scrape up any stuck bits from the bottom of the pot  as the wine cooks away, which won't take long at all.  Once the wine has cooked away, add the tomatoes.  (I generally use the smaller amount of tomatoes.  This makes a more delicately flavored sauce reminiscent of what we ate in Italy.  Americans are used to  sauces with more taste of tomato, and if that's what you like, use the whole can.  The sauce will be delicious, just stronger in flavor.)  Add the milk, which will probably come just below the surface of the meat.  Add enough water--probably about 2 cups--to come just a bit over the meat.  Stir and bring the sauce to a boil.
4.  Turn down the heat and let the sauce cook at a gentle simmer, uncovered, for 4 - 6 hours.  (I didn't have that much time at first this week, so I cooked it for about 90 minutes on Thursday, refrigerated it overnight, and cooked it for another 4 hours or so on Friday.)  If the sauce gets too dry, add a little hot water, but it should definitely reduce and become creamy--almost the texture of slightly runny oatmeal.  Taste the sauce and add salt and pepper if it needs it (this will depend on how much seasoning is in the sausage you used).  It's better to salt and pepper this at the end, because the flavors concentrate so much through the long cooking.  If you have time, allow this to cool and refrigerate overnight.  Like many such things, it will taste better the next day.
5.  When you are ready to eat the sauce, cook about 1 lb. of good pasta--we can get some excellent egg pasta in our store.  Wide noodles are best, so look for tagliatelle, pappardelle, or something similar.  (Even rigatoni will work, and if all else fails, get some fettuccini.)  Be sure to cook your pasta al dente.  When the pasta is cooked, drain it (don't rinse it), toss it with 1 or 2 tablespoons of softened butter, and then add the sauce.  (If the sauce is too thick, thin it a bit with some of the pasta water.)  You'll use about half this recipe for a pound of pasta.  Serve with plenty of freshly grated parmesan on the side.

ADDENDUM (3/20):  We ate some more of the Bolognese from this batch tonight.  It seemed too strong and concentrated, so I added some cream I had in the fridge (maybe a quarter of a cup).  I also added some pasta water.  You could add milk instead.  If the flavor of the sauce seems overpowering, tone it down a bit this way, and it'll taste like Siena.  It did tonight.

In my house, we observe the Italian rule that "the pasta should never wait for the people."  It's not a problem, actually:  people are usually champing at the bit after smelling this for a day or two.  So when I announce that it's almost done, there's a mad dash to the table, and everyone sits, forks poised, waiting for the first bite.  (Well, not really.  They're more refined than that.  But you can tell that mentally, they are in a "ready" pose.)
The most recent batch turned out pretty well.  I was observing that it wasn't quite like the Sienese one that is the Platonic Ideal of Bolognese for me when Sue paid me one of the highest compliments she has ever offered about my cooking.  "I don't know how it tasted in Siena," she said (she wasn't with Elizabeth and me on that trip).  "What I do know is that your Bolognese tastes a whole lot better than any Bolognese I've ever had in an American restaurant."  I'll take it.
This sauce is the real Italian deal:  get good ingredients, treat them with care, and allow them to work their magic on one another.  You don't need a lot of spices or fancy stuff to make this taste heavenly.  When I was younger, I used to think complicated was better when it came to cooking.  I've become a little wiser since:  time and careful attention are the essential ingredients.  Things need not be elaborate if they're made with affection and attention to detail, and anyone you care about is worth a little bit of fuss.
Posted by David Schildkret at 3:36 PM