The Budget Debate: America at a Crossroads 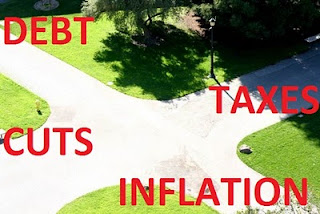 I think we may be witnessing an important turning point in American politics.  With the 2010 election, we installed many people in the US Congress who promised to slash spending to address our growing deficits.  Fair enough.  The deficit is huge; the debt is huge; both are scary.

The problem is that there are only two ways to get a budget--any budget--in balance:  you can either bring in more money, or you can spend less.  You can choose to do one or the other, you can choose a balance between the two, but there's no third option.  It's true that the federal government has a few tricks up its sleeve for bringing in more money:  for example, they can just print more.  Printing more money willy-nilly creates problems that are just as serious and scary as big deficits.  I'm old enough to remember when inflation was routinely in the double digits.  The interest rate on the mortgage for our first house was 11.5%.  I'm not too interested in going back to that.  Whether you raise taxes or print more currency, it's still bringing in more money, or to put it more properly, it's raising revenue.

Only we can't raise revenue in the United States these days, because as a society we're allergic to taxes.  We constantly think they're too high.  George H. W. Bush (Bush I) rather famously promised "no new taxes."  Backing down on that pledge was at least part of the reason he lost his bid for re-election in 1992.  Current Republicans go even further:  not only can't we raise taxes, we've got to cut the ones we have, for everyone.  So forget bringing in more money.

That leaves spending less--cutting the budget.  The problem here is that there are so many sacred cows that it's impossible to cut enough out of the budget to bring it into balance.  Even the Republicans' much-vaunted $74 billion in immediate cuts eliminates only half the deficit--and there's a little smoke-and-mirrors there.  The "cuts" are not on the actual current spending, because Congress hasn't actually approved a FY2011 budget (FY=fiscal year; FY2011 began on October 1, 2010, and goes to September 30, 2011).  These are cuts to what the White House proposed for FY2011; we're actually spending somewhat less because we're still using FY2010 figures for the most part.

So they're not cutting as much as they say they are.  Still, it's painful, yet it doesn't actually solve the problem.  And you don't have to look very far down the list of cuts to find items that are more ideological than fiscal.  It's no secret that the Republicans generally don't like the National Endowment for the Arts and the Corporation for Public Broadcasting, so of course their proposal cuts those completely.  Some in Congress think climate change is a big hoax that greenies created just to make life difficult for those oh-so-scrupulous corporations out there that really have your best interests at heart  (did you catch the irony there?).  So of course you cut funding for programs to prevent pollution and climate change.  You also cut foreign aid:  people in foreign countries don't vote in US elections.  It's also relatively easy to cut programs for poor people, because they tend not to vote in large numbers either.  (Whether it's moral or not is a separate question.)  President Obama's budget proposal makes smaller cuts overall, but even he describes them as "painful." Looking grave, he regretfully sacrifices a few fatted calves on the altar of fiscal responsibility, just to show that he heard the message of the 2010 election.  Still, all this is nibbling around the edges, because no matter what party you're in, you can't touch the biggies:  Social Security, Medicare and Medicaid, and defense.  This is where most of the money goes, so if you're doing this rationally, this is where you have to make the biggest cuts.  If you take them off the table, the whole thing becomes impossible.

So why are we at a crossroads?  Because if we're serious about the deficits, we're going to have to be willing to do some things that have become poisonous in American political discourse.  We have to raise taxes, and we certainly have to stop cutting them.  We have to be willing to look at the whole budget and see where we can eliminate waste.  We have to make cuts that share the pain, that don't cripple our ability to function, and that don't unfairly burden one segment of the population or one interest.

In my view, the problem comes down to this:  it's easy to say we want smaller government; it's another thing altogether when we start thinking about what that would actually look like.  Fundamentally, we want small government until we need government.  When there's a big hurricane or a big flood or an oil spill in the Gulf of Mexico, we expect the federal government to be there to fix it.  But you can't wave a wand and produce big government only for emergencies.  So really, we want more government than we're willing to pay for.  We want Wal-Mart government:  the same goods at a cheaper price, and we don't want to give up anything.   Right now, our basic stand as a nation is "Cut the budget, but you can't cut me.  Cut somebody else."  That obviously doesn't work.

I agree that we don't want to pass huge deficits and enormous debts on to future generations.  But I don't think we want to hand them an impoverished society, either--one where even fewer poor and mentally ill people are taken care of than now (and it's not great now); one where you can't rely on the federal government to help with a disaster; one where the air and water are poisonous from pollution and crops fail because the climate's out of whack; and one where there's no communal value put on the arts and culture.

If we mean what we say about the deficits and the national debt--and it remains to be seen whether we really do; it might just be political rhetoric designed to rouse the rabble--then we have to get serious about all the possibilities for addressing them.  We have to have a rational discussion about fair ways to increase revenues and to reduce spending.  I'm willing to pay higher taxes, and I'm willing to let the rules change on Social Security to keep it solvent.  Those would be a start.  Without such discussion, we're in a traffic jam, not a crossroads; nothing can be solved.  The various competing interests here can't all survive.  You either have to accept big deficits or raising taxes or cutting the budget.  Anything else is wanting to have your cake and eat it, too.

I really do think push is coming to shove here.  The coming months and years should be interesting as we discover what we really believe, based on what we're willing to do as opposed to what we say we're willing to do.  Maybe we prefer big deficits to the alternatives, in which case, we should stop baiting each other with slogans about deficits.  Talk, I believe the phrase goes, is cheap.  Maybe we should slap a steep tax on empty political rhetoric.  That might balance the budget in no time.
Posted by David Schildkret at 11:46 AM