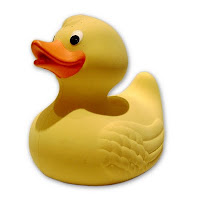 There are ducklings hatching all around us; I see a new brood almost every day when I walk through the park with the dog.  For some reason, seeing the hatchlings this afternoon reminded me of when the girls were little.  One of them--I'm now not sure which--pronounced very solemnly from her crib when she was less than two years old, "I have two ducks."  And she did.  Two stuffed toy ducks.  That I cannot now remember who said that is a testament to their early language skills:  both were pretty good talkers from an early age.  I wonder where they got that?  (I am rumored to have startled the family doctor by correctly identifying a stethoscope and a sphygmomanometer--a thing you use to check blood pressure--sometime before the age of five.  I think this is possibly an exaggeration, as that's an awful lot of Ss and THs for a little kid to get out successfully.  I know a lot of adults who would need surgery to untangle their tongues if they attempted it.)

I can tell you with confidence who declared, "Actually, Daddy, you usually wear a shirt."  This was Elizabeth, sometime between the ages of two and three.  I had gone in early in the morning to get her out of her crib.  I had my trousers on, but I hadn't yet put my shirt on.  Hence the accurate and precociously worded observation.

The early acquisition of language is incredibly fun to watch.  I am sure both kids had a sound for certain objects before they actually had a word--they'd squeal in a particular way when they saw a dog, for instance.  Elizabeth was sometimes hard to understand--Ls and Rs eluded her--but somehow I could always follow what I quickly dubbed Elizabethan English.  Miriam's specialty was referring to things by part of their names.  For instance, spaghetti was "gobby" for a long time.  Eventually, that grew into "spee-gobby," and that made it clear where "gobby" had come from.  Miriam used to like the songs from Disney's Beauty and the Beast.  "Marie!  The speegobby!" she'd exclaim in the opening number.  It took us a while to figure out that she had misheard "baguettes" as "spaghetti."

That's all a long time ago now.  Both girls, as I still call them, I'm embarrassed to admit, are incredibly articulate and often outspoken young women. (I hope you're reading Elizabeth's blog, "Lizard Breath."  There's a link over there on the right.)  Both speak a couple of languages other than English, and it looks as though Spanish is going to prove to be Elizabeth's meal ticket for a long time.  Not only do they speak well, what they say is usually well worth listening to.  It has been from an early age, for both of them.  Either they were saying something worth hearing, or they were saying it a whole lot more clearly than little children usually do.  Often, it was both.

So whenever I see those little ducklings, I am likely to think of that morning when one of them--it doesn't matter which--proclaimed with both linguistic and arithmetical accuracy, "I have two ducks."
Posted by David Schildkret at 6:40 PM